Have you ever wondered how the Birmingham Track Club came to be? Who envisioned it? What that person imagined the club would be like? Whether the club still does what the founders intended?

If you have been around the club for even a small amount of time, chances are you have heard the name Arthur Black. It is his name that is on our annual service award and with good reason. The Birmingham Track Club sprang from the vision of Dr. Black. Besides being the founder of the BTC, Dr. Black has served for many years as our historian. Much of the information contained here comes from his notes and reminiscences.

In the early 1970s, before there was a Birmingham Track Club, Arthur Black had a dream for Birmingham. As a physician he was concerned about the health and well-being of the people of his city. To improve those things, he proposed organizing the Birmingham Fitness Council, an organization whose purpose would be to make Birmingham the fitness city of the nation. By all reports, that vision has not been realized. In fact Birmingham routinely ranks high on the list for ill health and low on the list for fitness.

Annually, Men’s Health conducts a study and publishes a list of 100 cities ranked by fitness level. The rankings for 2011 are based on how often people exercise, how much television they watch, how many video games they buy, and the death rate from deep-vein thrombosis, a condition linked to lots of sitting. Birmingham came in at 91 out of 100 with a grade of solid F. We can’t blame it on the heat. Atlanta is ranked #8.

Dr. Black tried to get Birmingham energized. Then he tried again. 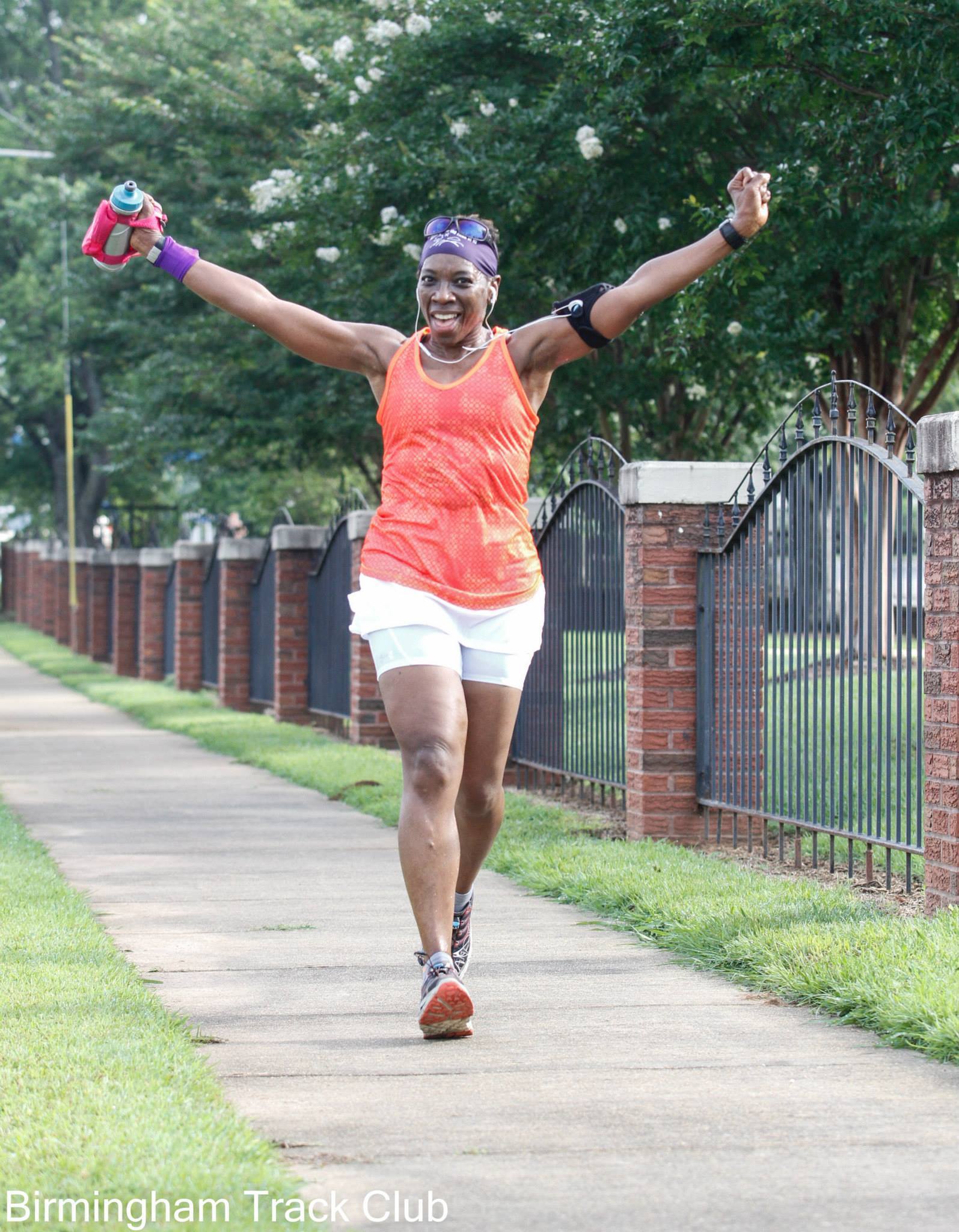 In August 1970, Dr. Black sent a letter to every high school and college head coach in Jefferson County inviting them to a meeting and panel program, the purpose of which was to provide information and create interest in forming community fitness councils. The letter generated absolutely no response.

An article in the Birmingham News in December 1972 chronicles the second attempt. Worried that the initial failure was due to his lack of name recognition, Dr. Black recruited Dr. James E. Sharman, Director of Health, Physical Education, Recreation and Athletics at UAB to serve as the spokesman for the group, the Birmingham Physical Fitness Council. Even a recognized name did not inspire the energy needed to get this group off the ground.

While those efforts may have failed, one attempt by Dr. Black did succeed and still succeeds today. Ultimately his efforts led to the creation of the Birmingham Track Club.

When, exactly, did the Birmingham Track Club come to be? The Articles of Incorporation making the BTC an official non-profit organization were signed in 1979, the date found on lots of BTC merchandise. Clearly the club existed for several years before that. Records provided by Dr. Black list him as the first president of the club, serving in 1976, and the Arthur Black/Rick Melanson service award records its first winner in 1977 (see lists below).

The definitive answer comes from notes Dr. Black wrote in 1991 on the occasion of the annual club banquet. Because of his commitment to the health value of exercise, Dr. Black worked with a small group in the early 1970s to offer a series of track meets for people over the age of 35 to provide motivation for regular exercise. From this effort came the Birmingham Track Club. This early club, officially organized in July 1975, met at the Vestavia High School track, listened regularly to speakers, and received articles on exercise and health. Members of the group jogged distances of ½, 1, or 2 miles.

A memo from Dr. Black with the handwritten date of 1975 addresses “Birmingham Track Club members and other interested joggers” with details of the “next meet” at Vestavia High School. He writes as “President” and reports a club of 29 members offering annual memberships at $5 for individuals and $10 for families. At that time the club held meets every six weeks or so, weather permitting. This memo announces the next one on January 18 at Vestavia High School and applauds the prior one downtown in November while apologizing for “some mix-up with times and trophy presentations.” Dr. Black also reported that he was raising his annual mileage goal from 700 to 800 miles for the new year and urged others to set goals for themselves. 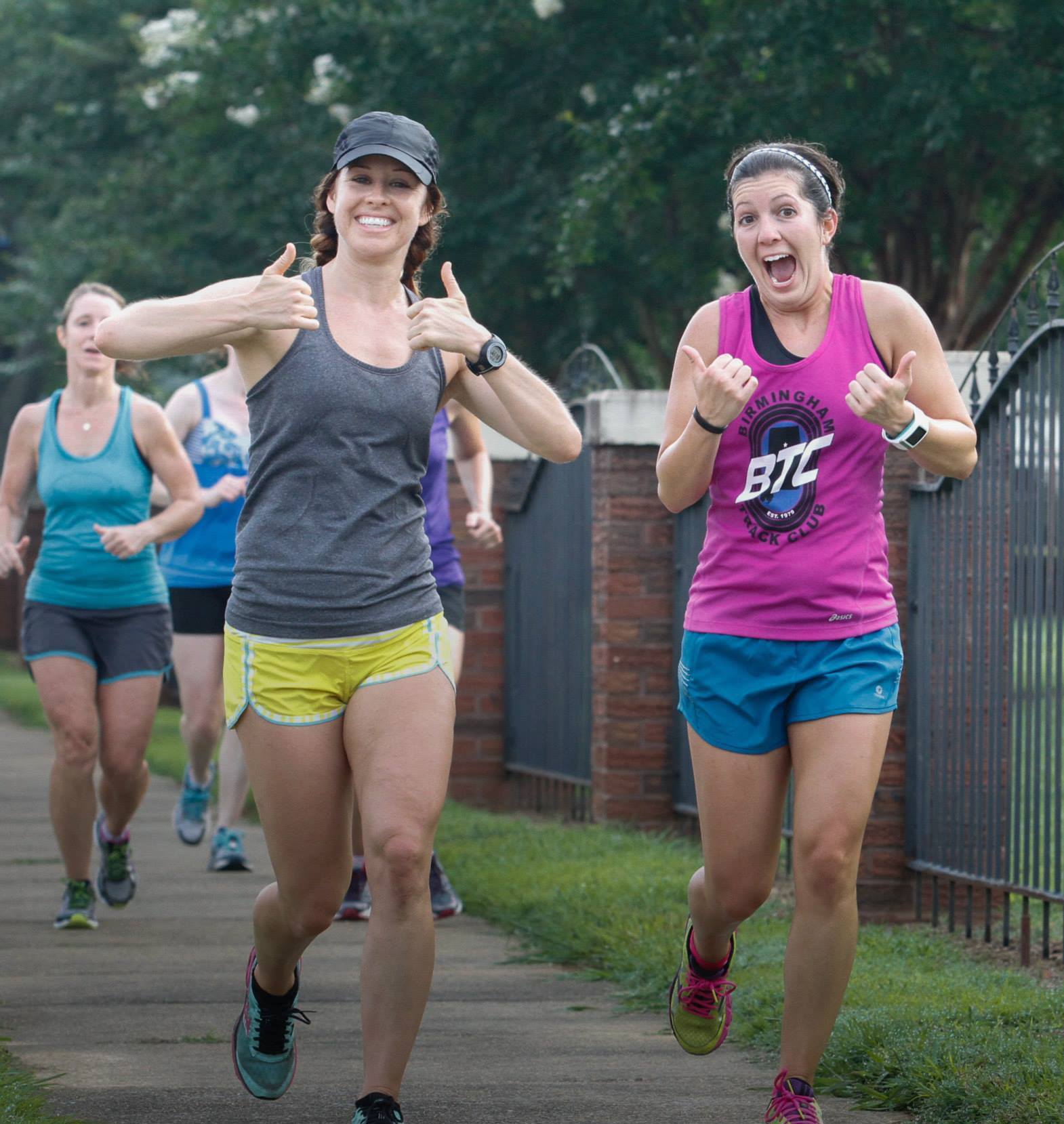 When the BTC was incorporated in 1979, its stated purposes were:

The original by-laws contained a very long section about the educational and training aspects of the club. This section was removed in 1999 and replaced with a simpler statement: “The primary purpose of this organization shall be the education and training of individuals in and around the community of Birmingham, Alabama as to the benefits of jogging and running for fitness, health, and recreation.”

Other mandates for the club are few. The by-laws call for an annual meeting “for the purpose of electing officers and directors and for the transaction of such business as may come before the meeting” and allow for special meetings for any purpose not expressly prohibited.

The elected officers—president, vice-president, secretary, and treasurer—along with the past-president make up the Board of Directors, the group given “the exclusive right to act on behalf of the organization.” The Directors have the task of appointing committee heads who serve as members of the Executive Committee and help govern the club, but the by-laws are clear about where the authority lies: “The Directors shall have the authority to veto, by a majority vote, any decision by the Executive Committee or any committee head.”

How does the current BTC stack up when measured against the purposes and expectations outlined in the Articles of Incorporation and the by-laws? Simply stated, those documents indicate that the BTC exists to help people run, and that is what we do.

In 2004, the Birmingham Track Club offered its first ever coached Couch to 5K program, helping over 100 new runners complete the Race for the Cure. Many of those runners continued on to complete the Vulcan Run and the Mercedes Half Marathon. The program, created by Danny Haralson, continued as a service of the BTC for several years before morphing into an element of Run University. Over the years the club has continued to support these runners and to encourage them to keep up their running by helping them celebrate their first two-mile run, presenting them with “I’m a Runner” shirts to recognize the accomplishment. In return, these new runners make up a large percentage of our new members.

There are BTC groups that run regularly together — Meredith’s Marathoners, the Village Runners, and the Red Eye Runners among them — and many of the Wednesday night Trak Shak regulars are BTC members. 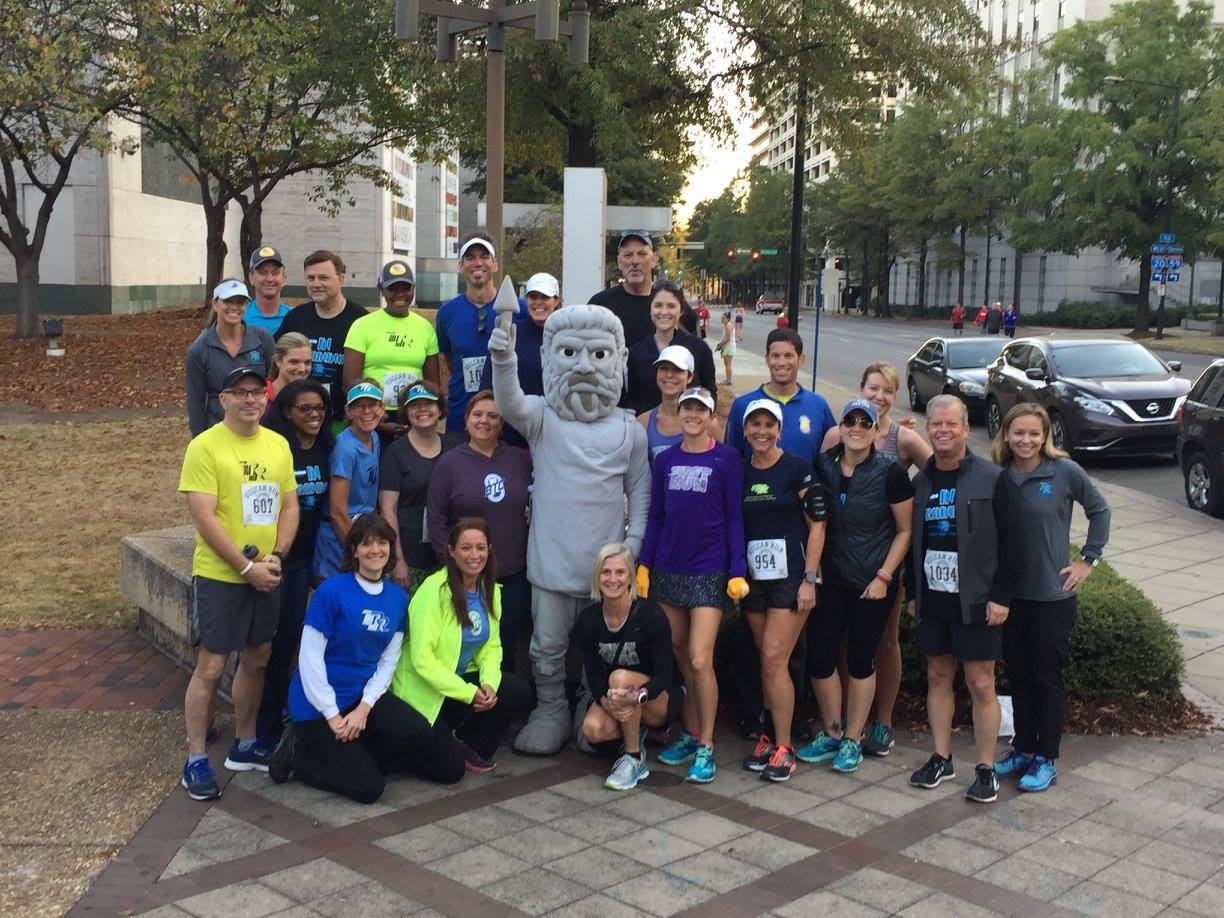 The club continues to encourage running through a variety of racing opportunities. The Vulcan Run 10K in November is the major event, but there are others of assorted length and type. The Peavine Run on July 4th offers a combination of road and trail running. Statue to Statue in April provides a scenic, hilly 15K. These are just a few of the local races with BTC ownership or involvement.

The BTC booth at the Mercedes Marathon expo is “information central” for runners both local and foreign. The club helps make this event runner-friendly by offering everything from directions to restaurants to advice on race day arrival and parking to suggestions for tackling the course to plain old runner to runner conversation.

A couple of recent programs have been introduced to help runners keep running.

Many things have changed since Dr. Arthur Black first attempted to improve fitness levels in Birmingham, probably most notably the way we communicate with each other. He sent letters and memos by mail to interested individuals. Today we tend to prefer our information in electronic form. Improving that channel of communication has been a primary goal of our current elected officers, and the results of their efforts should be visible soon after you read this. The Birmingham Track Club has changed in many ways over the decades, but it remains a club of runners for runners. 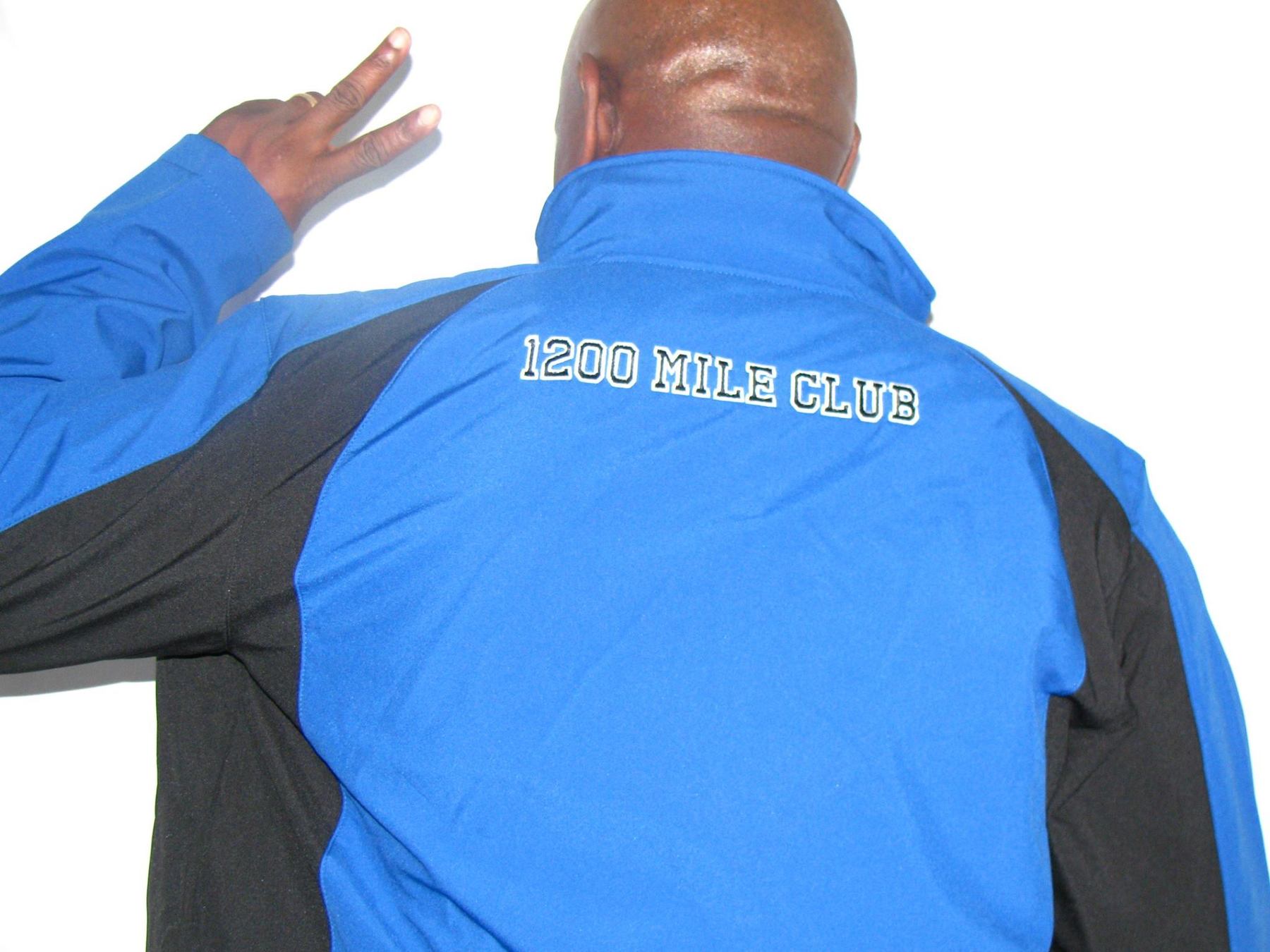 Several years ago the 1200 Mile Club was introduced to encourage and reward consistency in training. Since its inception, over 100 runners have earned that jacket for logging and reporting the completion of over 1200 miles in a year. Nineteen have a shot at reaching that goal in all four of the years the program has existed. And this year the BTC re-introduced the Grand Prix, a program that encourages participation in a number of running events, both as runners and as volunteers. Without volunteers not a single race in Birmingham would exist, so encouraging volunteerism is a vital part of helping people run. As this program grows so should our ability to keep runners running.

Many things have changed since Dr. Arthur Black first attempted to improve fitness levels in Birmingham, probably most notably the way we communicate with each other. He sent letters and memos by mail to interested individuals. Today we tend to prefer our information in electronic form. Improving that channel of communication has been a primary goal of our current elected officers, and the results of their efforts should be visible soon after you read this. The Birmingham Track Club has changed in many ways over the decades, but it remains a club of runners for runners.

Want to be a part of BTC?
JOIN THE CLUB
JOIN BTC
View Our Newsletter
Get Connected
Back To Top
×
We use cookies to ensure that we give you the best experience on our website. If you continue to use this site we will assume that you are happy with it.Ok